At Hangzhou’s International Fireworks Festival, More Than Pyrotechnics on Display 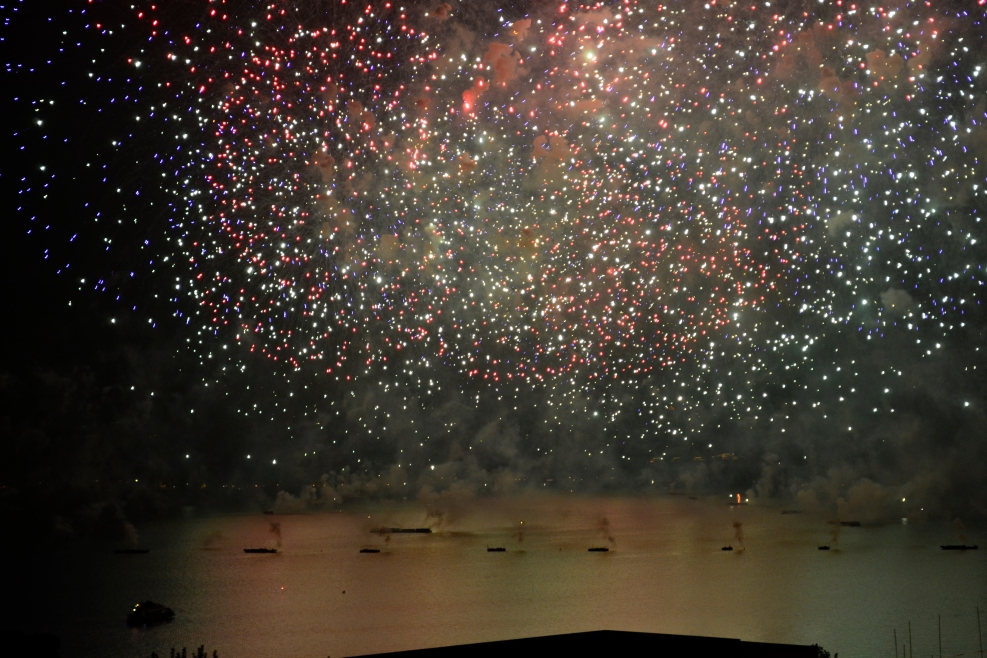 Last night here in Hangzhou, the city government put on its annual International Fireworks Festival. So far, the number of reported burn injuries has topped out around 100. (Warning: this post is a rant.)

As a kick-off to the city’s month-long West Lake Expo, the Fireworks Festival isn’t exactly world famous, or much of a draw for people across China, but it is a big deal here in Hangzhou. Set against an evening backdrop of the West Lake’s surrounding hills, the annual pyrotechnic extravaganza brings thousands of people into the packed streets of downtown, all hoping to find a good vantage point for the show.

Unfortunately for most of them, that vantage point ends up being right there, in the road, with a lousy view obstructed by buildings and trees. (One good picture of the scene is here – but warning: the link gives away the ending if you read Chinese.)

This is crowd control in Hangzhou: clear out the lakeside public parks, establish a police cordon around them, and then charge a high enough entry fee to keep out all the riffraff.

Meanwhile, post policemen at every corner of every intersection, and put them in charge of making sure pedestrians don’t get in the way of any cars coming through. And because of the possibility for unrest – perhaps when people realize they won’t be allowed near the lake to see the show – conspicuously reinforce the usual the 协勤 “mediation duty” deputies with teams of stern-faced 武警 People’s Armed Police posted nearby.  Add squads of dress-uniformed 解放军 soldiers to keep it all patriotic.

Of course, concerns about things getting out of hand can be well-founded. The fireworks show is an incredible feat of synchronized pyrotechnics, but unless you’re some VIP, nobody’s gonna simply provide you a means to see it. If you want a good seat – and my, what face you’ll gain if nab one – you better have money, connections, or a whole lot of cunning.  See the potential here for trouble?

Even up on our apartment building’s rooftop, an exclusive domain for a dozen or so owners of some of very nice apartments, the law of the Jungle was in effect.  It appeared our wealthy next-door neighbors hadn’t even thought twice about stealing our cheap-o deck chairs for their own sitting enjoyment. What if they’re not going to come up and watch? They probably wondered about us. Better nab those chairs before someone else does!

Meanwhile, down below, the authorities maintained their cordon, protecting from stampede those with means (money, connections, cunning) to watch the fireworks from the lakeside. But it turned out the real danger to these spectators was from in front, not behind.

The fireworks show reprised what we’ve all come to expect from China’s state-run performances. Like the opening ceremony to the Beijing Olympics, it was immense in scale, impressive in synchronicity, and really way too long. From the opening salvo to the final fizz-out – an amazingly long 45 minutes – the western sky was filled with a continuous swath of multi-colored sparkle and flame. These people did invent fireworks, after all. And last night they spared no expense: in the fire-reflecting waters of the lake below, I counted more than a dozen large barges sending rapid-fire volleys of smoke trails skyward. It was like a 4th of July ‘grand finale’ at a big city back home – you know, if you combined several years’ worth of fireworks shows from New York, D.C., Chicago, and Los Angeles all into one.

And also removed all their safety precautions. The show was oriented to the north shore of the lake, where, in the foreground, the sparkling heavens above were complemented by ground-level fizzlers that shot up like fountains of white-hot water.  And at some point during the show, a rocket from one of these nearby launchers flew sideways and smashed right into a lakeside viewing platform, where it continued burning for over thirty seconds. According to various Chinese media outlets reporting today, at least 100 people sustained injuries, and 30 were rushed to the hospital (through those packed streets) with serious burns.

All in all, what a disaster. And now the online media have pounced, demanding to know whether the victims will be compensated (they will – but how much is not known), and waxing eloquent about all the better things Hangzhou’s government could have spent its money on – you know, besides shutting down half the city for a VIP fireworks show that ended up injuring scores of people.

Usually I try to end on a positive note, but I won’t here. This is part of the 21st-Century China I’ve come to know: a shared sense that everyone’s out for themselves, and that even public events aren’t really about the public; grandiose schemes, implemented with great inconvenience at best and unchecked negligence at worst; a willingness among everybody to just go along with it all, until they or somebody they know gets harmed; and the predictable, self-serving moralizing from all the members of the chattering classes when they sense that somebody in charge screwed up.

It’s all pretty maddening, not least because it’s impossible to see where this kind of society is actually headed.

Those run-of-the-mill town fireworks displays on the 4th of July back home? Appreciate them – for the meaning, not the display.

Filed under Life in the Bike Lane

3 responses to “At Hangzhou’s International Fireworks Festival, More Than Pyrotechnics on Display”